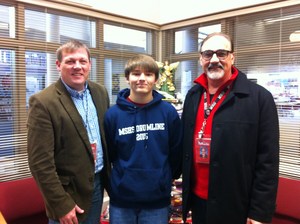 Last year 8th graders at Mountainside Middle School entered an International Astronomical Union contest to name an ExoWorld star and the exoplanet orbiting around it. They won with their entry "Ran" (star) and "AEgir" (planet). These two names were the brainchild of James Ott who is now a freshman at Mt. Spokane High School. Read more . . .
"Ran" is the Norse goddess of the sea who stirs up the waves and captures sailors with her net. "AEgir" is Ran's husband, the personified god of the ocean. AEgir and Ran both represent the "Jotuns" who reign in the outer Universe. Together they had nine daughters.
A total of 573,242 votes from the public contributed to the naming of 31 exoplanets and 14 "host stars." The Mountainside star/exoplanet had 12 entries from eight different countries with a total of 17,509 votes cast. Vote totals ranged from 3,379 to 251. Mountainside will receive a plaque commemorating their contribution to astronomy. They have also earned the opportunity to take part in the naming of a minor planet.